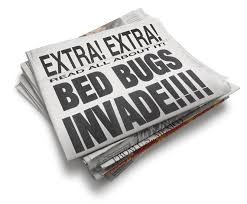 A Look Into the Growth of the Bed Bug Industry

Bed bugs have been on the rise and making big headlines globally, so much so that an entire industry has spawned from pest management companies to specifically treat bed bug infestations.

Some of these companies produce heating devices and machines specifically designed to kill bed bugs, as well as offer specialized bed bug resistant luggage, mattress encasement, and pesticides. The bed bug population has even incited the creation of bed bug advisory boards warning folks about hotels, motels, other dwellings, and which cities are being ravaged by these awful little bugs.

A Brief History of Bed Bugs

We know that they’re stealthy, creepy and crawly, and they love to bite. Bed bugs really are way more common than folks like to think. What we know about the history of bed bugs is that they have been around for thousands of years (over 3,000) and date back all the way to ancient Egyptian times.

Originally, they inhabited caves and fed off of bats, but when humans began to inhabit caves, they latched on to a whole new (and preferred) food source.

Bed bug infestations were first recorded in England in the 1500s, and later found their way to the Americas by traveling on ships with European explorers. As civilization grew and people continued to travel and explore, bed bugs found more places to hid and hitch a ride.

By the early 20th century, bed bugs were everywhere, infesting homes, hotels, and other heavily populated dwellings. They were nearly eradicated in developed countries when DDT was first introduced in the 1950s, but by 1972 use of DDT was banned by the EPA, because research had shown that DDT was harmful to humans and animals.

Why Bed Bugs Are Back (and in Such a Big Way)

The 1990s saw a resurgence of bed bugs, as they began popping up in port cities such as New York, Los Angeles, Miami, and San Francisco. As international travel began to grow, bed bugs began appearing more often in hotels, motels, apartment dwellings, homes, hospitals, and nursing homes, for example.

This surge in travel has led to bed bugs making their way worldwide, reaching epidemic levels in the US, Canada, Europe, Australia, and Africa.

With the invention and use of pesticides, the infestations had become manageable, however, in recent years bed bugs have returned with a vengeance because now they have been able to develop a mutation to become resistant to most pesticides.

What Does Pesticide Resistance Mean for Treatment Against Bed Bugs?

There are more than 300 products registered with the EPA for use against bed bugs. Most of these products can be used by consumers, while a select few are registered for use only by trained professionals.

Because bed bugs have become immune to most pesticides, the EPA requires that any product that claims to kill bed bugs must be supported by data to show the product will kill bed bugs when applied according to the label. Although the data may show that the pesticide can kill bed bugs, how well the pesticide works will depend on other factors.

According to the EPA, not all treatments will work in all situations so you'll want to carefully weigh all your options. While hiring a professional to treat bed bugs can be quite costly and beyond and beyond the means of most people, many people opt for a DIY solution.

Fortunately, there is a safe, cost-effective, all-natural treatment that has been proven to kill bed bugs.