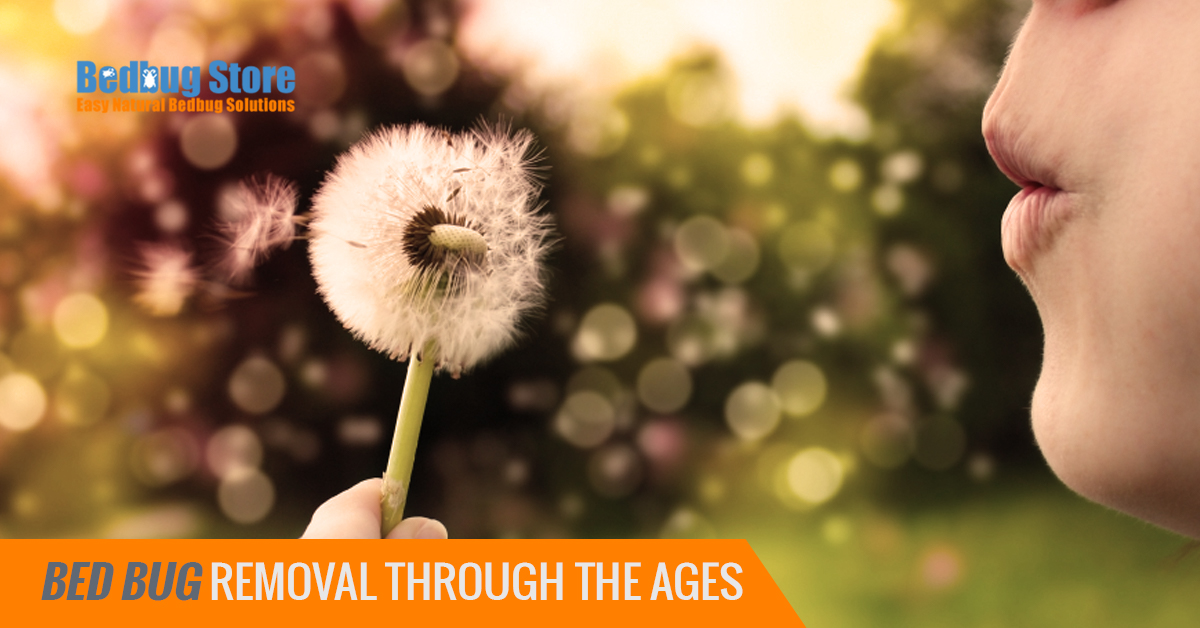 Bed Bug Removal Through the Ages

Recently we told you all about multiple types of modern bed bug removal techniques and how well they work. We talked about how you can steam them and vacuum them up (something we certainly suggest as part of the best bed bug treatment around).

Then we discussed chemical treatments, which used to be much more effective before the bed bugs built up a tolerance to most of it. We also talked about how well heat treatments work: great on a small scale, but large-scale treatments are insanely expensive.

There have been bed bugs biting humans for as long as humans have been around. The prime culprit, Cimex lectularius, actually prefers human blood to any other type of host, though they’ll certainly feed on other animals if there aren’t any people around.

So, during all of those millennia when people woke up with bites on their skin that they didn’t go to bed with, there’s no doubt that they’ve been looking for ways to stop the problem. Here are some techniques that have helped, and hindered, people’s war with bed bugs.

Imagine that you run a tiny inn hundreds of years ago. People start complaining that something is biting them in the middle of the night, and that’s not really any surprise because you live in the inn and it’s happening to you as well. So you grab the straw-stuffed mattress, drag them outside, and hit them repeatedly with the nearest stick. A lot of dust and skin cells are stirred up, so you think you’ve done a pretty good job.

Unfortunately, you might have only knocked off 10% of the bed bugs you were hoping to eradicate. First of all, it’s likely that you didn’t hit the mattress hard enough to dislodge the eggs. Also, since you did this during the daytime, most of the bed bugs weren’t on the mattress. Instead, they were probably hanging out in the bed frame or under the floorboards. Oh, and when you drug the mattress throughout the house, you also dropped bed bugs everywhere you went.

Besides being fun to say, diatomaceous earth is a form of bed bug control that has worked for ages and continues to work today. People must have thought it was magic when they discovered dust they could drop on the ground that could kill certain insects. But it’s not magic at all, simply science. Diatomaceous earth is made from the finely-ground shells of ancient organisms called diatoms (thus DIATOMaceous earth.) This insect control dust gets onto the body of the bed bug, absorbing a waxy protection agent on its exoskeleton and thereby drying it out. Since the bug can no longer control its water level, it dehydrates and dies.

Perhaps the best part about diatomaceous earth is that it’s a physical bed bug killer; there are no chemicals whatsoever. It’s also effective against other crawling insects such as ants, centipedes, crickets, cockroaches, earwigs, fleas, and silverfish.

How can bean leaves help control bed bugs? Like the diatomaceous earth, the leaves work in a physical way. The leaves of beans have trichomes, which are little hairlike parts that can be found on many plants. When a bed bug walks across it, these trichomes act as tiny spikes that pierce the joints of the bed bug’s legs. The more it struggles, the more pierced it becomes. All you have to do is pick up the leaves and burn them.

While this is a traditional method of bed bug control, you won’t be surprised to know that scientists are working on artificial strips that would contain similar hairs. Don’t be surprised if you see “bed bug tape” here at our Bed Bug Store in a few years.

There’s no doubt that bed bugs can be killed by low temperatures. Drop the temperature down to 0-degree Fahrenheit for long enough and you’ll kill most bugs. If you lived in a cabin in the 1700s and had a chair infested with bed bugs, you could leave it outside during winter. And you could do that to your bed too, but then you miss the bed bugs that are in the wood near the fireplace. So you could extinguish the fire, but you might freeze to death too. And if there’s a single pregnant female that cozies up to you in the night to get warm, the process would start all over again. Unless you’re dead.

Wishing isn't going to make the bed bugs go away. It didn’t work in the past, and it isn’t going to work now. You have to take action, and that means finding a remedy for bed bugs that really works. That’s why we’re in business, to help our customers kill as many bed bugs as possible. Start right here to combine the best of all bed bug killing techniques that really work!

Let us at  Bed Bug Store assist you. All our products come with a 90-day 100% satisfaction guarantee. We have been relieving customers of their bed bugs since 2004. Our products are also 100% natural, chemical and pesticide-free.  The smell you notice when using our solution, is the fresh scent of peppermint.

Made with 100% natural essential oils, Bed Bug Patrol is a great alternative to harsh pesticides and insecticides which bed bugs are becoming increasingly resistant to.