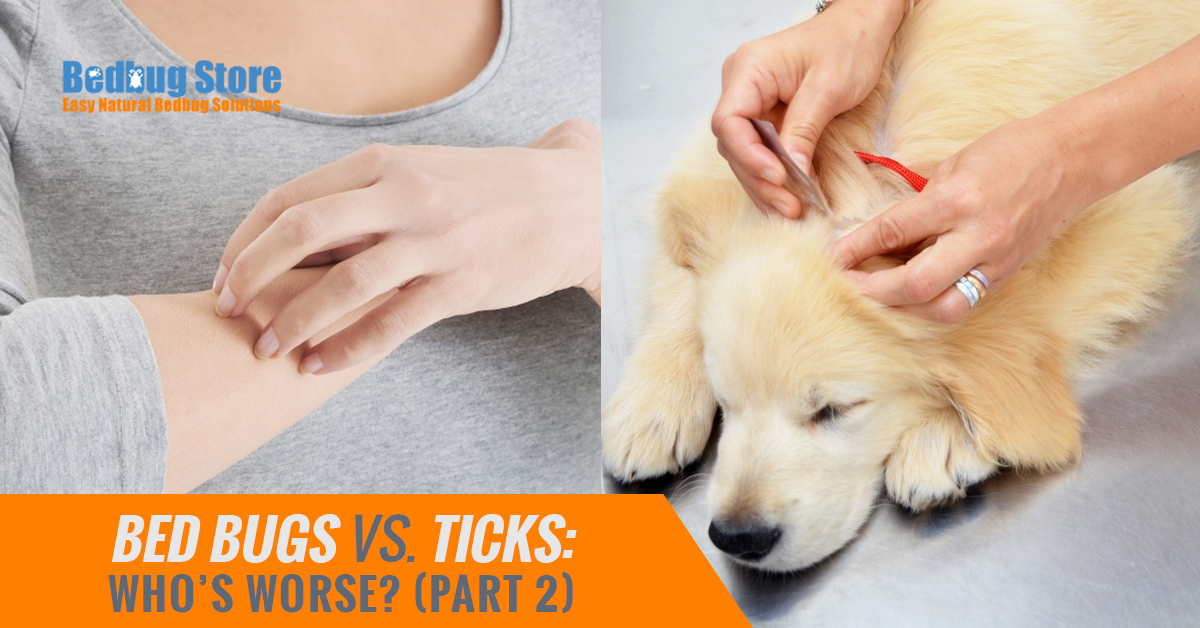 In our previous article, we started this conversation about the difference between ticks and bed bugs. We told you about which one is worse in certain circumstances, even though they’re both really horrible. They’re both about the same in size, and they both suck blood, but they have some very unique differences.

Ticks aren’t insects, and bed bugs don’t stick around on you as ticks do. Bed bugs show up in urban environments, while ticks are always brought in from grasslands or wooded areas. Getting rid of them is also a big difference between ticks and bed bugs because ticks have to be manually removed (but at least you can see them). Bed bugs have to be removed with more overarching bed bug treatment products, such as our bed bug traps and spray.

Who Do They Bother?

Here’s one of the big differences between ticks and bed bugs. Cimex lectularius, which is the species we call bed bugs, is just one of 90 species in the Cimex family. But those other 89 species don’t have much interest in us. Cimex pilosellus, for instance, feeds almost exclusively on bats. In other words, the bed bug is essentially exclusive to humans. It’s like a little pet that nobody wants!

Ticks, on the other hand, are more opportunistic. While there are some ticks that specialize in which host they go after, the most common types we run across are just as happy to grab onto a human as they are on a dog, raccoon, deer, moose, elk, fox, coyote, or just about anything else that passes by.

If there were a tick that specialized in humans, you can be sure that they’d all be drawn directly to that spot on your back that you can’t quite scratch. You know the one. It’s right...almost, uh...not quite...uh, I hate that spot! Anybody got a fork?

Don’t click this link. Don’t. Don’t do it! It’s just a bunch of images of swollen ticks! And it’s pretty disgusting. (They’re also kinda funny looking.) Many ticks species will swell up on blood before dropping off of their host. They use this blood as energy to molt into their next life stage.

Bed bugs tend to get more red as they drink, but they don’t have the ability to expand rapidly and become big fat blob monsters as some ticks do. As we said, they come back repeatedly and leave behind bloody poop stains in your bed. Is there any wonder we want to help you get them out of your house with our all-natural bed bug treatments?

We hate to compliment the bed bugs, but we will give them this: at least they don’t carry disease. While their bodies may contain pathogens, there appears to be no way that they can transmit them to humans.

Ticks, on the other hand, are well-known for being disease carriers and transmitters. The tick will feed on a person or animal and the bacteria, virus, or protozoa will live in its body. When it feeds on its next host, the pathogen is transmitted.

Want to do more reading? Here’s a page about all of the horrible diseases ticks can give you. Oh, and ticks can carry more than one of these at the same time, infecting a person with multiple illnesses at the same time!

Of course, bed bugs were once on the brink of being eradicated completely from hotels, only to reappear as they developed pesticides and as working pesticides were found to be hazardous to human health. If bed bugs did carry disease, it’s likely that there would have been an even bigger push to eradicate them and that more money would be put into wiping them out completely. So in some ways, the fact that bed bugs don’t carry disease has probably saved them from harsher treatment.

That’s not stopping us, though! We’ve created an all-natural remedy for bed bugs that gets them out of your house. Other companies might have given up, but we’re moving forward with our natural bed bug treatments!

Who Has Better PR?

Ask someone “would you rather have ticks or bed bugs,” and they’ll look at you funny. No one wants either! But societally, it’s much more embarrassing to have bed bugs.

Ticks, on the other hand, have one thing going for them. While there’s never been a superhero called Bed Bug Man, there is a fairly well-known hero named The Tick.

Since 1988, The Tick has been in comics, had a kids’ animated series, two live-action series, a video game, a board game, and lots of action figures (including Taco Bell toys).

So Who’s The Ultimate Loser?

Well, with bed bugs and ticks existing in the world, humanity is the loser. But hey, at least neither of them fly!

After tallying up all of the above, we have to admit that ticks are total jerks. They ruin a nice walk in the woods, they give spiders a bad name, they look grosser when they swell up, and they can latch onto you like a…well, like a tick. Oh, and they carry debilitating and deadly diseases, so there’s that.

But, at the same time, it’s really easy to avoid ticks if you stay out of wooded areas and grasslands, use Deep Woods Off, and give yourself a good check before getting back in the car. It’s difficult to avoid bed bugs unless you never travel anywhere and never invite anyone to stay in your house. And then bed bugs attack you in the room of your home in which you should feel the most comfortable. Plus they bite you when you sleep, which is totally uncool.

You know what. They’re both horrible. And while we don’t have any tick spray, we can help you with a bed bug killing spray that’s safe for humans and pets. We might not have tick traps, but we do have bed bug traps that will keep those suckers from moving from the carpet and up your bedposts. Work with theThe Bed Bug Store and we’re more than happy to help you get rid of those horrible little pests.