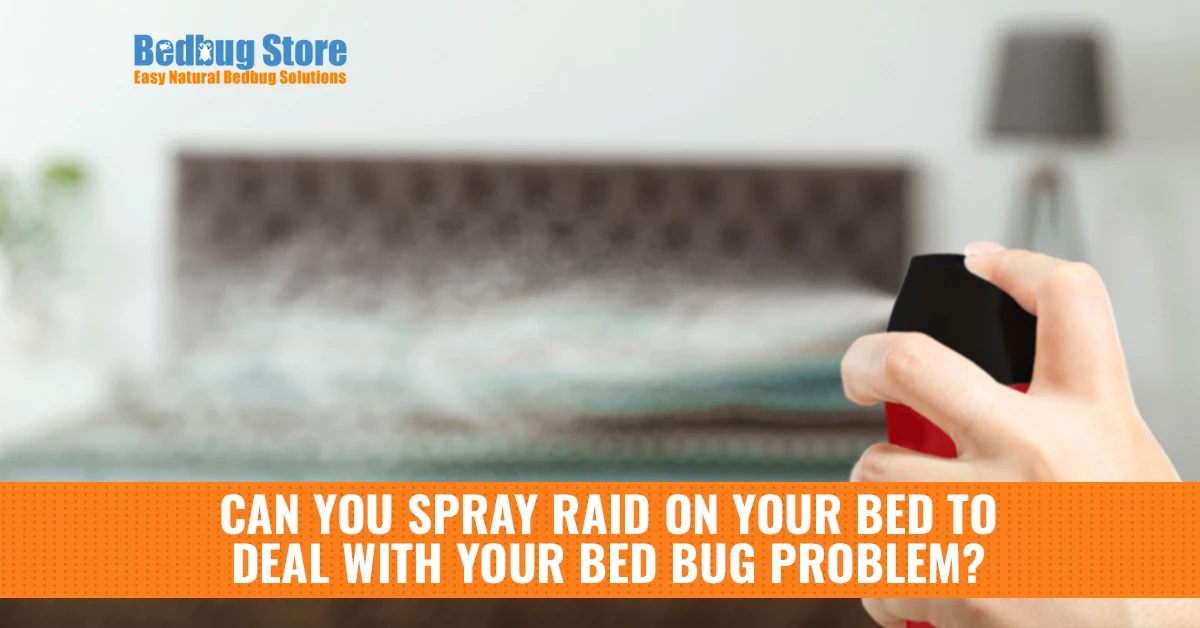 Can You Spray Raid On Your Bed To Deal With Your Bed Bug Problem?

It’s an interesting question: “Can you spray Raid on your bed to get rid of bed bugs?” We know that not everyone has the time to read all the way to the end of a blog, so we’re going to answer this one really quickly and then expound on it later.

Alright, now that we have that out of the way, let’s go into more detail about the reasons you shouldn’t put Raid on your bed.

Most of us have used an outdoor bug spray on a wasp nest. And when you hit the wasp dead-on with it, it usually flies off in a daze to die somewhere. But if you keep watching the nest, you’ll find that many other wasps will return to the nest to check it out, only to find it abandoned. They’re walking all over the surface to investigate, but what you think would be a danger to them isn’t keeping them away. They might suffer some ill effects, but that’s only if they show up immediately after you’ve sprayed the nest. If they show up after it’s dried, there’s no way for the poison to transfer to them. They’ll simply fly away to start a nest somewhere else.

Something similar occurs with your typical bed bug spray. If you can find every last bed bug and blast it in the face with Raid, then you must be the bed bug whisperer in order to draw them all to you. The problem is, there’s absolutely no way to find each and every bed bug. If you see one, there are five more that you’ll never be able to find, those hiding in the bed frame or behind the trim. They tend to only come out at night, and signs of movement usually make them run. You’re never going to get them all in your sights.

Imagine the smell of Raid. It’s something that doesn’t really leave your memory, and the next time you smell it your brain probably tells you to get away from it.

Now think about where bed bugs live. In your bedroom, often in your mattress. Do you really want that Raid smell in your bedroom for the eight hours a night you’re sleeping? The smell of Raid lingers, and the answer to the question “can you spray Raid on your bed” becomes obvious.

As we’ve discussed before, bed bugs were almost eradicated with the use of harsh pesticides at the beginning of the 20th century. But as well as the war on bed bugs was going, many of the chemicals that were being used were deemed far too dangerous to use around humans.

The chemicals that the basic home insecticides use today are still dangerous, just less so. They still contain neurotoxins and carcinogens with names like allethrin, cyfluthrin, piperonal, butoxide, permethrin, tetramethrin, cypermethrin, and imiprothrin. And these aren’t chemicals that simply sound scary. These are included as poisons to kill insects.

Cans of Raid always suggest using them in a well-ventilated area and washing your hands after using it. After all, it says right there “Do not apply this product in a way that will contact any person or pet, either directly or through drift.” First of all, this insecticide can cause respiratory trouble that could require medical attention. It’s especially bad if someone already has some sort of respiratory problem. You’ll also want to keep Raid away from your eyes because the poisons are eye irritants. It’s bad for your skin as well, and anyone allergic can react if they simply touch something that’s recently been sprayed.

What does all this mean? It means that you certainly don’t want to spray Raid on your mattress in order to deal with your bed bugs.

You know, if Raid worked to get rid of bed bugs problems in one fell swoop, it might be worth the danger of using it. Bed bugs are pretty annoying, after all, and after a while, people grow so tired of them that they’ll try absolutely anything.

Take a look at your average can of Raid. Is it Ant and Roach? Is it Wasp and Hornet? After you’ve identified what it’s for, you have to ask yourself one more question: are any of those insects bed bugs? Nope, they’re not.

While all insects have certain commonalities, they also have some very distinct physiological differences. Some are more susceptible to one chemical, others are more susceptible to other chemicals. A can of Raid isn’t your friend when you’re facing a bug that it wasn’t meant for. Considering how well bed bugs have developed resistance to many chemicals, it’s hit and miss if a basic can of insecticide will work...even if it’s specifically labeled as being a bed bug spray.

Use A Dedicated Bed Bug Spray!

When we decided to create a bed bug spray, we went searching for all-natural ways to kill them. Our proprietary blend is non-toxic to humans and pets, and it stays around long enough to kill bed bugs that might pass by later. Oh, and it smells pretty nice too!

We know how detrimental having bed bugs can be to people’s lives since they attack in places they should be resting. We’d love to help you get rid of your bed bugs so that you can get a restful night’s sleep.