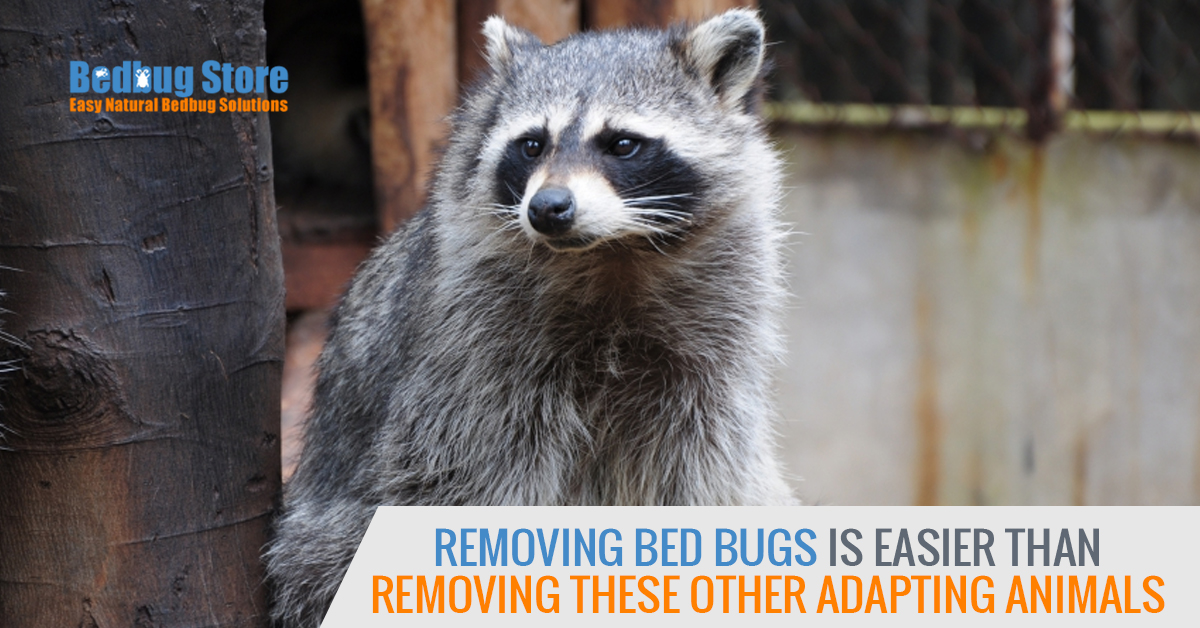 Removing Bed Bugs is Easier Than Removing These Other Adapting Animals

In our previous article about ticks, we discussed how they’re relatively easy to remove. Many of them don’t attach to your body immediately, as they’re often looking for the softest skin available. Clothing prevents many of them from getting anywhere, and you can simply pick them off, stick your tongue out at it because “you failed, you little %$#@”, and toss it back into the woods or into the toilet. If they do become attached, removing them is fairly simple if not a little disgusting.

Battling bed bugs, on the other hand, means changing your environment more than searching your body. After all, humans have created the perfect environment in which they can thrive. We give them places to hide, places to mate, and a year-long warm environment in which they can do so. Oh, and we lay out a smorgasbord for eight hours every night — our bodies — so that they can come and dine in peace. What more could they want, an utter lack of predators? Well, we’ve given them that too, as we call the exterminator and remove bed bug’s natural predators such as cockroaches, ants, spiders, mites, and centipedes. You might as well wear a birthday hat to bed every night because we’re throwing them a party every day.

Bed bugs aren’t the only animal out there we’re helping to thrive. While we might not be protecting them in our house, we do encourage other animals to multiply as we change the environment. Here are some of the “success” stories out there that we’ve helped to shelter, feed, and breed.

If someone says the words “disgusting New York apartment,” the first thing that probably comes to mind is a cockroach. As a city grows, there are rich parts of town and poor parts, and as the poorer parts become derelict, repairs that prevent cockroaches from moving from apartment to apartment. Of course, once one apartment has them, almost every apartment will.

It might surprise you that cockroaches shouldn’t even be in New York; cockroaches tend to be tropical creatures. In fact, most cockroaches couldn’t survive a winter in New York City if it wasn’t for the artificial heat we supply. But because there’s always a warm place to hide, cockroaches and New York will always be connected.

Raccoons are cute little trash pandas, and watching them frolic in the wild can be fun. But they’re also one of the most common carriers of rabies, and they have sharp teeth and often aren’t afraid of humans. Farmers hate them because they can get into feed supplies. Unfortunately (or fortunately, depending on your opinion of them) many of them end up getting hit by cars in both rural and urban environments.

Raccoons are well adapted to living with humans, mostly because their dexterous hands can help them get into just about anything. They’re omnivores and can eat human food with ease, so the trash cans we put out provide them with just about every food they need to survive. Suburban fences don’t stop them, and while we might have diverted many of their water supplies, our sprinklers and birdbaths give them more than they need. We’ve also heavily reduced the animals that feed on them, such as wolves, bears, and large cats. Why don’t they take over the world? Well, our actions have actually helped one of their predators...

Coyotes are one of the most hated animals in America. (This article tells you why.) Farmers hate them because they attack cattle, and homeowners aren’t fond because they sometimes attack housepets. But despite control efforts, the coyote has adapted to living with humans like few other animals.

The coyote was once a mammal of the western United States, but trying to destroy them actually made them move east. One reason that coyotes thrive is that they can survive even after a pack splinters, which is called a fission-fusion adaptation. When a pack is threatened, coyotes can go off in groups of one or two and start their own pack. Even more amazing, threatened numbers cause them to have more pups. While a regular litter might be six, a pack in distress might have litters of 15 or more! (It’s kind of like a social version of a starfish; cut it up and you’ll just have more.) When you splinter coyote packs, and if you also provide bridges so that they can cross rivers, they’re suddenly everywhere in the country.

Coyotes have no problem adapting their feeding habits to the suburbs and cities. Trash cans are abundant, as are rabbits and squirrels. Perhaps most significant is that no one in the city is trying to poison or shoot them as they might in the wild. Urban areas actually work as a safe space for coyotes.

These spikes, of course, are to dissuade pigeons from landing on the building, nesting, and leaving their mess all over everything. But that doesn’t control the population, as the pigeons will simply go to a building that doesn’t have such protection.

Pigeons are technically doves, rock doves to be precise. And the rock part of their names comes from the fact that they were originally doves that nest on cliffsides. We essentially give pigeons exactly what they want whenever we erect a tall building, giving them a reasonable facsimile of their natural habitat. With few natural predators in cities, pigeons have certainly found a place to thrive.

So we’ve helped pigeons in the “shelter” departments, but it’s also pretty obvious that we’ve helped them in the food department. Big cities throw away a lot of food in the trash, and they also leave a lot of crumbs behind on the sidewalk as people eat on the go. Humans also have a weird interest in feeding animals.

While you can close your door on all of these other animals, you can’t keep bed bugs out that way. We have to be honest...writing about all of these other animals have been nice because every time we write about bed bug treatments we itch like crazy! Just talking about them is horrible, but once they’re in a home, we want to get rid of them. That means taking action. Because they tend to hide when we’re awake, we have to lay bed bug traps for them and kill them with bed bug spray. While these bed bug eradication methods can be intensive, at least there’s an answer, and that answer is the Bed Bug Store.