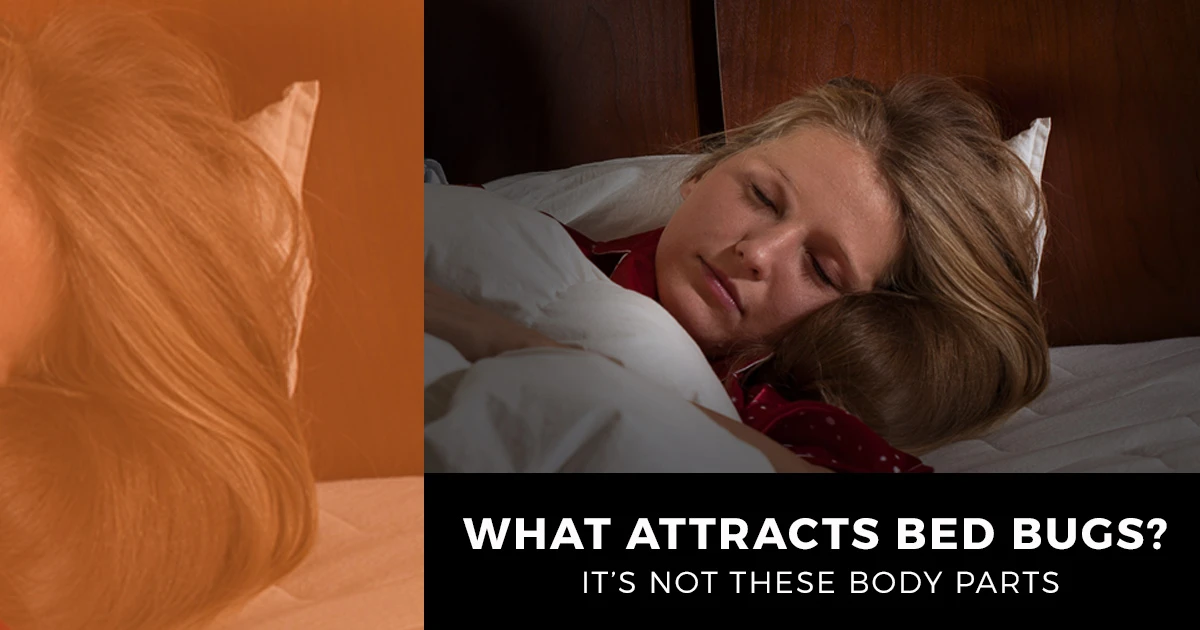 What Attracts Bed Bugs? It’s Not These Body Parts.

In our previous article, we detailed what bed bugs are attracted to. It turns out that it’s what you give off -- namely the body odor, warmth, and carbon dioxide as you breathe -- that are the primary ways that bed bugs find you.

Of course, it’s also the proximity. Once bed bugs have found you, they stick around in the seams of your mattress and the frame of your bed and then come out to find you again at night.

So, that’s what attracts bed bugs. And once you have them then it’s important to follow a series of steps that include a non-toxic, all-natural bed bug spray as well as a mechanical means of destruction such as diatomaceous earth. A vacuum also works wonders to get many of the less-hidden ones out of your home.

But what repels bed bugs, at least when it comes to your body? Is there anything you can do to make them wary of you? That’s what we’re going to discuss today.

Did you know that there are over 90 species of bed bugs? There are bed bugs that feed exclusively on bats (bat bugs, Cimex adjunctus), as well as ones that feed on animals but aren’t so picky about what kind it is.

Cimex lectularius is the bugs that feed on human beings, and because of that, it is the only one that most of us care about. This one, often called the common bed bug, seems to have a preference for humans for one particular reason: our relative lack of hair. While it can feed on other animals if they are starving, it will walk around your dog or cat in order to get to you, its preferred meal.

Bed bugs will almost always avoid the places on the body that have hair. While lice require hair and ticks love to hide in it, bed bugs have a hard time traversing the follicles and prefer to bite you in areas that don’t have hair. This includes the face, upper chest, and inner thighs. Even if you have a beard, they’ll go for your lower neck or upper cheeks. Maybe your forehead. Goodness, they’re horrible, aren’t they? It’s not only hair that bed bugs don’t like to deal with. You should also know that...

Bed bugs don’t like to be trapped (there aren’t many insects that do, now that we think about it). But they don’t often crawl under your clothing in order to bite you. If you start to stir, they want as fast a getaway as possible, and the clothing would just hinder them.

At first, you might think “okay, bed bugs will really leave me alone in winter when I’m wearing my heavy pajamas.” Unfortunately, bed bugs are quite mobile and will move from one end of the bed in order to find exposed skin. When the rest of you is covered from head to toe, it just tends to concentrate the bites on the parts of the body that are exposed. Your face, neck, and hands are now the only exposed parts, which means they’re more likely to bite you there. This makes leaving the house particularly difficult because now your bites are on the parts of your body that you leave revealed to the public on a daily basis. And boy, do bed bugs bites itch. Click here to check out our ways to treat bed bug bites.

Bed bugs are wily little creatures, in that they inject you with a painkiller so that you won’t wake up as they saw through your skin. (They also inject you with anticoagulants in order to make it easier to drink your blood, because they’re horrible.)

The painkillers are so that you won’t wake up and smack them while they’re feeding. This is why it takes most people so long to determine that they do indeed have bed bugs.

Bed bug traps can help in this verification, but for the longest time, most people think they’re having an allergic reaction to a new soap. (Or they blame spiders. Spiders get blamed for every random bite people get. In truth, spiders are your friend because they’re nature’s all-natural bed bug killer. So if you have bed bugs, invite some spiders in!)

We mentioned above that bed bugs don’t like to feel trapped, and if the host (that’s you) is moving around more, they’re less likely to stick around long. “Oh good,” you think, “the parasite is no longer sucking my blood.” But it’s actually a bad thing if you interrupt a bed bug because then they’re not satiated. That means they’re going to come back and bite you later, and you’ll have two bites instead of one. Completely horrible.

Bed bugs are pretty lazy in one sense. They don’t want to work hard for their food, so they often pick the softest places on the body bite. That includes the neck, the belly, the thighs, and other, shall we say, tender places.

Where won’t you find many bed bug bites? The knees, for one, which is often dry and rubbed by jeans. Anything that could get calloused is often ignored, including areas of the feet. If a part of the body is tough and has hair, it will pretty much be ignored by bed bugs and they travel a couple of feet in either direction to find more tender skin.

We just thought we’d say it one more time: bug bugs are just horrible. They eat and run, unlike a tick that you can at least pull off. They bite you in your bed, which should be part of your house where you feel the most comfortable. You can keep mosquitoes out by closing the door or getting a bug zapper. But how do you deal with bed bugs?

If you’ve been unfortunate enough to get bed bugs in your home, it’s time to find a guaranteed bed bug killer. The first place to start is The Bed Bug Store’s All-Natural Bed Bug Killing Spray. It’s non-toxic to humans and pets because it’s made from nature’s bed bug killers (spiders). (We’re kidding, it’s mostly made from a proprietary blend of plant oils).

If you’d like a complete rundown on how to get rid of bed bugs, click on this video. It details the best plan of attack to deal with the little vampires, including physical removal, heat treatments, trapping, and the use of a bed bug spray for the mattress. If you have any questions, we have experts waiting to talk to you. Contact us here!